Good job, Investigation Team...
After Tohru Adachi's battle against the investigation team; after he accepted his defeat against those young brats, Magatsu questioned his actions.

"Why did you want to save a world in which if you don't have talent, you can't arise?"

Magatsu could not understand them. His "twin" Izanagi, (who represents hope), and his buddies had emerged triumphant. For what? To return to the monotonous reality...the stupid and boring reality.

Adachi, his master, was truly giving humanity a world free from despair. Free from all the unfortunate events that humans must deal with in order to become someone...

As his Persona, Magatsu would fulfill the deepest desires of Adachi's heart. He was the embodiment of such longings.He was the chaos, the movement, the one that would break the boring monotony and give a bit of fun to the game of cat and mouse inside the quiet town of Inaba.

Adachi knew that he was the largest fish within Inaba; and with the power of his Persona and the Midnight Channel, no one can convict him. No one has evidence against him...

"With this power, we can change the whole world.
Don't you think?"

But how would he not raise any suspicions? It was pretty straightforward. Maintaining a cheerful and jovial detective façade, no one would suspect you. You could carry out as many murders as you wanted, manipulating evidence or simply leaving no clues...

"It feels good to shut people up when they're acting cocky.... doesn't it?"

At first, the murders were all acts of impulse."Those whores deserved that end", swirled within Magatsu's thoughts. But as the Investigation Team began to approach each time...the real game started. Adachi often accidentally, (or sometimes purposely), let out the police investigation results to those fools...

"I was bored, let's play a game of cat and mouse.
Which side do you choose Narukami ?"
If only Narukami had burned the evidence at the time, everything could have continued on its intended course. "How pathetic you must be to accept bond and friendship over this."

"This is why I HATE dealing with you."
"Wouldn't it have been better if everyone lived as shadows? Without masks, without shame to show your most twisted thoughts".
The Investigation Team thought differently.

"Just when it was getting fun."
"How pathetic",
Magatsu means "Calamity"
Magatsu, also knows as Magatsu-Izanagi, isn't a Endeavor (or a pet) at all. He's Adachi...Adachi's heart.
He represents "Emptiness"; distaste for the world and humanity at large.

He knows that it is only a matter of time until his master gets out of prison.
And then, they can start the game again.
.....
....

The sound of an old TV interferes and brings you back to reality...You can see something on the screen:
The sharp detective asks, "Why did you hang those corpses from telephone poles and TV antennas?"

The suspect under investigation replies, "Because the world sucks... I guess."

The sharp detective asks, "You killed them all for a reason like that!? You... Don't you have any remorse!?"

"No, not really" The suspect under investigation answers with an arrogant smile

The old TV turns off,
it seems like it's already midnight... 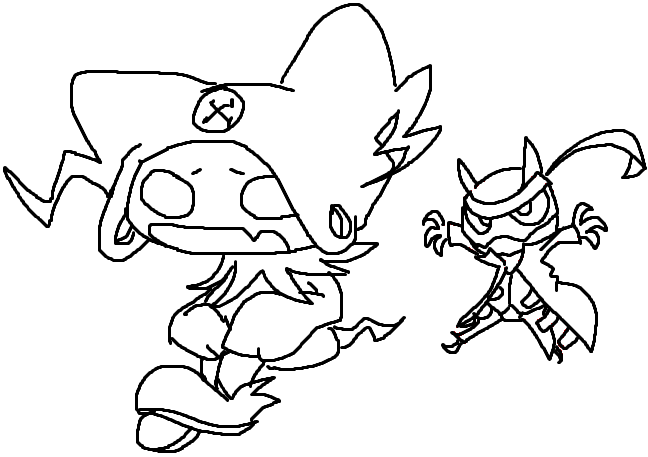 Credits
Magatsu is a fanpet based of Magatsu-Izanagi from Shin Megami Tensei: Persona Series / Persona 4 and Persona 4 Golden videogame developed and published by Atlus
Profile and coding by

Paula
Background Base by

Daniela and editing by

Boiled Cabbage On A Silver Platter

Tape and Glass and a Crime Unsolved

Drawn in Chalk: A Crime Novel